Sire: SQTR Austin
| 31319997 | Medium Fawn
Dam: DSRTWND Shayla
| 31319997 | Bay Black
$1250.00
Ask a question
Details
Certificate
Stacked genetics here! Lacey's bloodlines run deep through famous champion alpacas. One of her paternal great-great- grandsires is Peruvian Hemingway G171, who in 1993 was one of the top four herdsires in the first group of alacas to arrive in the United States from Peru. Another is Peruvian White Out G170, a top rated direct Peruvian import classified as "1 - Superior". PPPeruvian Dracula 6016 is one of Lacey's paternal great-grandsires. Dracula was a full Accoyo imported in 1995. The fleeces of that Accoyo import group averaged 8.61 pounds, 36% per alpaca more than other animals imported that year. The fleece of the Accoyo huacayas averaged 22.13 microns and some had micron counts as low as 17. The average standard deviation was 4.82 microns and the co-efficient of variation averaged was 22.91%. Another animal in that group of Accoyos was PPPeruvian Royal Fawn 6014, the most expensive alpaca ever sold and one of Lacey's maternal great-grandsires. Lacey sports a fleece that you would expect from such distinguished ancestors; it has terrific coverage and is dense, fine, has gorgeous crimp architecture, as well as soft handle! Like others in the Hemingway line, Lacey passed her fleece characteristics to her cria. Lacey has good conformation, too. And she proudly upheld the award winning ways of the champions already mentioned and other of her progenitors winning her first class before she was even a year old. Lacey will be a fabulous addition to your herd helping you preserve the glory days of those early imports from Peru!
Awards 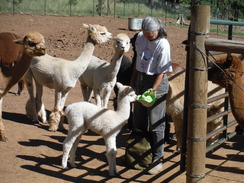 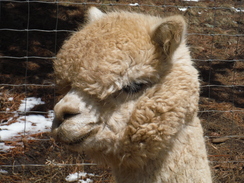 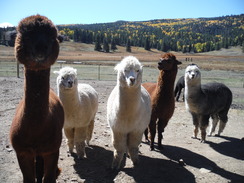 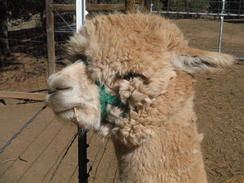